As the use of credit cards continue to grow with in the UK we chart the current state of the sector. We will cover the latest data on credit card ownership amongst the UK population, how transactions numbers are rising but average values are falling, how borrowing is still yet to recover to pre-2008 levels, how card fraud continue to rise with ever more sophisticated scams and how mobile and apps are revolutionising the industry.

Following on from the UK Cards Association’s findings, the organisation’s summative report on 2017 found that the expected value of card payments is expected to rise from £638 billion in 2016 to £942 billion by 2026 – an increase of £304 billion.

The UK has seen a steady increase in credit card spending by the population since the mid-1990s. July 2018 currently holds the title of the month with the highest spend since records began – with over £15.3 billion worth of card-based transactions taking place. This is a significant increase of almost five times the size of the £3.3 billion cumulatively spent by cards in 1993.

The patterns around spending are distinct and logical – with the number of credit card transactions increasing significantly in the months leading up to the festive season in December, before dropping sharply by February.

The first chart illustrates the steady rise in credit card purchases occurring within the UK. While debit cards are largely favoured by the public for making purchases, the value of the transactions that the payment method is generating cannot be underestimated. 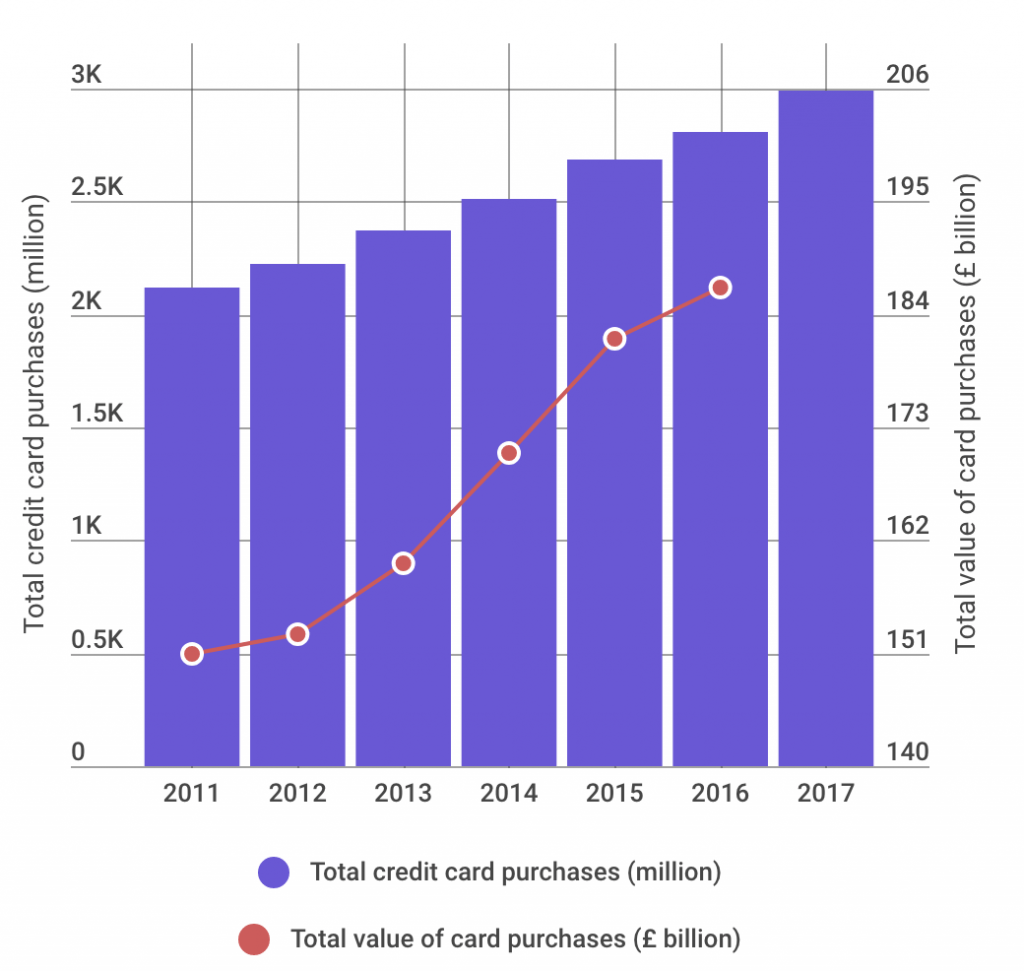 The year-on-year change in value of UK credit card purchases illustrates the re-emergence of trust in the credit industry following the nation’s exit from the Great Recession that began in 2008. The seismic leaps in spending that occurred in 2014 and 2015 are a testament to the UK consumer market’s increased confidence in credit in spite of the austerity occurring throughout this timeframe.

UK Finance anticipates card-based spending to increase exponentially into the coming decade, with 18.2 billion debit card payments forecast for 2026 – a 57% increase on that of ten years prior. Furthermore, 8.7 billion cash payments are expected to occur in 2026, which would represent a 43% drop from a decade before.

Typically, cardholders spent most of their finances on food and drink (£114 billion collectively), while other consumer services totalled £100 billion. Financial services amounted to an £80 billion overall spend and entertainment saw £57 billion of purchases. One-third of all card purchases were made at supermarkets, while every fifth transaction was made on entertainment.

UK Credit Cards In Use 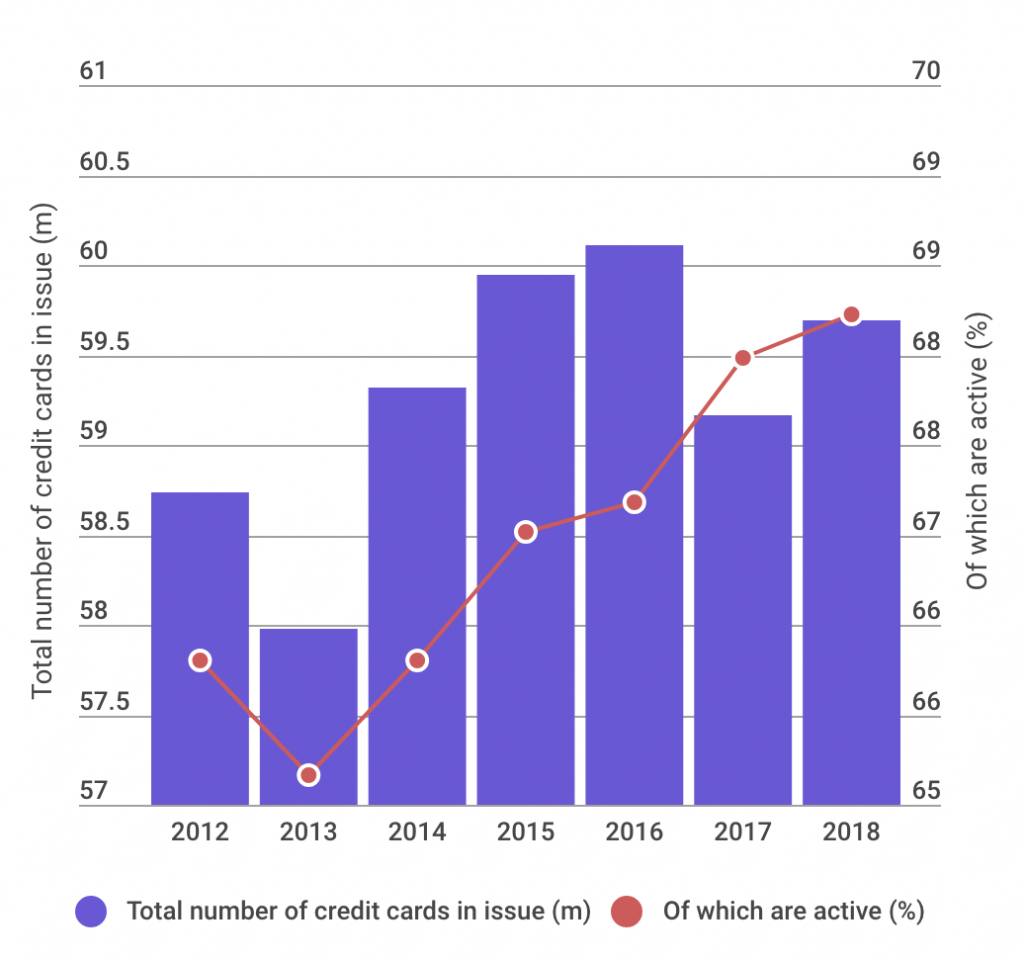 The chart above on the right appears to indicate an overall decline in the average value of goods purchased via credit card. However, it may point to the rise in popularity of contactless payment methods and the £30 spending limits in place to protect customers from fraud. This large-scale increase in frequent low-priced transactions has effectively reversed spend averages to their lowest rates since 1999.

Overseas, cross-border spending amounted to over £3.2 billion in October 2017, with the number of international purchases increasing to 121 million. This represents a 2% rise – the biggest month-to-month growth rate since September 2015.

While October 2017 played host to an increased level of card activity overseas, the number and value of payments were still lower than the previous year – by 11% and 13% respectively when compared to October 2016. 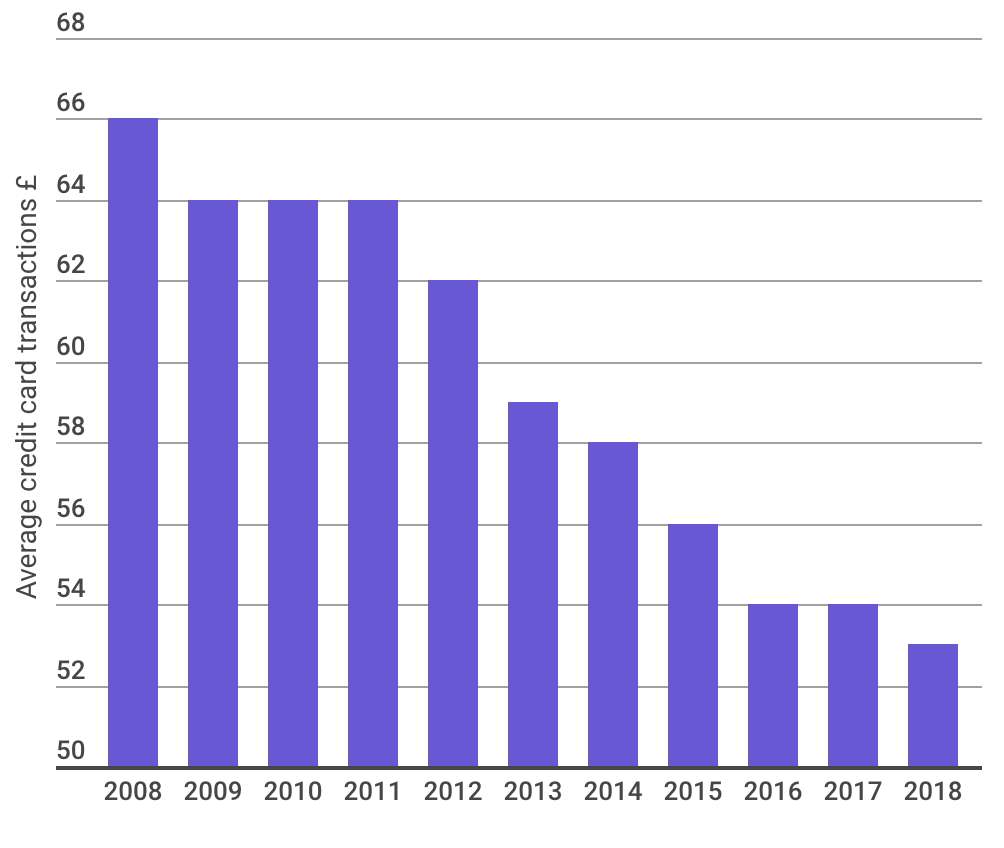 While there are larger volumes of debit card owners in the UK, 34,490,000 credit card holders are currently active domestically according to figures published in July 2018.

These figures indicate debit cards are 48% more prominent across England, Wales, Scotland and Northern Ireland (with an estimated 51.1 million active card holders). This however doesn’t negate the heavy continuing usage that credit cards are experiencing in the years following the market crash of 2008 and the well-anticipated arrival of contactless.

The number of active credit card holders in the UK has been largely static in recent years, with those using the payment method typically belonging to a higher income, full-time employment demographic – however, the spending of credit has continued to increase year-on-year despite lower percentages of new adopters annually compared to its debit-based counterpart.

The number of payment cards in circulation may be largely static, but forecasts over the volume of payments in coming years are proving to be much more optimistic – with the UK Cards Association reporting that they’re anticipating a rise to 21.9 billion taking place by 2026 – an increase of 6.6 billion on the decade before.With the continued rise of cards, a rise in the acceptance of credit and debit cards is also gathering momentum. The number of retailers in the UK currently accepting card payments now tops 1 million – while the number of outlets totals 1.3 million.

While we can acknowledge an increase in growth in consumer confidence following the financial crises of the late 2000s, it’s important to avoid overlooking the hindrance caused to borrowing in the UK.

According to Bank of England figures for 2018, the value of sterling lending fixed on dwellings has recently recovered from a volatile period in the mid 2000s where total lending hit over £30 billion, with repayment rates failing to keep up. While the rate of borrowing has increased to its highest point since the financial crash, repayments are somewhat more consistent than 11 years prior.

This chart is telling in terms of how England, Scotland, Wales and Northern Ireland reacted to, and are still adjusting to, the Great Recession and austerity – and how lending is influencing their purchases.

The gap between borrowing and the repaying of credit is currently in a sizeable gulf spanning four years. While this could be a sign of heightened confidence in the consumer’s ability to pay back their debts, it may also be a sign that UK austerity has presented the public with an increased need to borrow to make ends meet – and may make for fascinating reading should the distance between the two figures continue to grow. 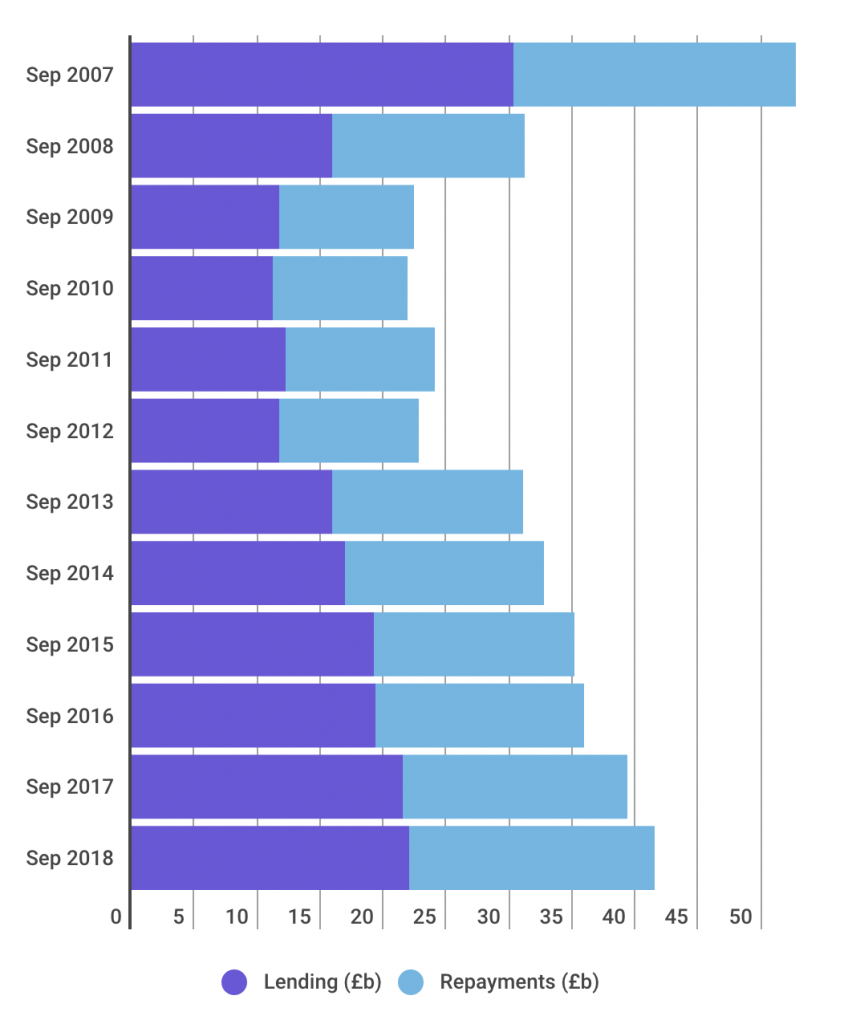 Based on these trends, the UK’s total interest repayments on personal debt over a 12-month period would total £50.1 billion – an average of £137 million per day.

Losses pertaining to card fraud has risen into prevalence in recent years, shown by a 31% year-on-year increase to £321.5 million stolen as a result of acts fraud on UK cards in the first half of 2016.

During the same period, credit and debit card spending nationally had risen by 4.8%. Card fraud as a proportion of card purchases equated to around 8.7p of every £100 spent. This represents a sizeable increase on the average of 7.9p per £100 the previous year.

While fraud has experienced a big rise in usage over recent years, preventative measures too have become more effective and intricate. Today, £6 of every £10 that’s attempted to be stolen through acts of fraud is prevented. This is equal to a total of £475.7 million saved from criminal activity in the first half of 2016.

Purchases that were made remotely also experienced a sharp increase in fraud during the first half of 2016, with over £224 million lost on over-the-phone, online and mail-order purchases – a 31% rise on the same period a year before. Similarly, eCommerce card fraud rose 46% to £156 million in the same timeframe, while online card spending increased by over £8 billion domestically to £74 billion in total.The first half of 2016 also saw overseas losses to fraud on UK cards rise by 29% to £106.3 million.

Despite a slowdown in UK economic growth coupled with rising inflation, payment card transactions continued to grow slowly into 2018.

This has been facilitated by a rise in the accessibility of point-of-sale terminals, which increased by 10% to 2.2 million available in retailers nationwide by the beginning of 2017.

Contactless card acceptance has also grown exponentially. In 2014, 216,000 contactless bank-owned terminals were in place. This figure more than doubled within two years to 450,000 by 2016.

There were as many as 79.3 million contactless cards in circulation by October 2017 – a rise of 2.6 million on the prior year. By the same month, 81% of all debit cards in the UK were contactless. This represents a significant increase on the figure of 68% from the previous year.

Contactless cards have played a significant role in the demise of cash, with July 2018 heralding the news that card-based payments had finally overtaken coins and notes for the first time – where 13.2 billion instances of card transactions pipped the 13.1 billion cash-based purchases in the calendar year 2017.

The use of contactless cards also rose to around 5.6 billion transactions in 2017 – almost double the figures posted in the year previous – while 63% of citizens now use contactless payments.

This means that debit cards are now the nation’s favourite choice in making payments, rising to  prominence three years earlier than initially forecast, and why so many small businesses now have some sort of credit and debit card reader.

Another contributing factor to the ease in which card usage has overtaken their cash-based counterparts is the rise of banking apps and mobile payments.

BBA reported in 2017 that customer activity on banking apps has risen by 354% to that of five years ago – representing a welcome shift towards greater individual monetary management.

In the UK there were 19.6 million online banking users active in 2016 – with logins occurring 159 times each second. Furthermore, people are opting to use banking apps to access a broader range of services with more frequency. Savings, credit cards and mortgage/investment accounts usage have increased 30%, 46% and 86% respectively during the one year period between 2015 and 2016 alone.

The total number of online purchases using debit cards in 2016 stood at 3.2 billion, with £195 billion spent in total – representing an average transaction cost of £60.28. These figures mean that in 2016, online purchases accounted for 25% of all debit card transactions by volume and 37% by value.

Elsewhere, the more analogue form of mail order/telephone purchases totalled 384 million, with £48 billion spent. Therefore, these forms of transactions amount to 2.9% of debit card purchases by volume and 9% by value.

The vast majority of online transactions that occurred in 2016 took place in the service sector. These purchases accounted for around 76% of the total purchases made over the web, while 34% was comprised of financial-based services.

Q3 2017 saw a large increase in IVAs, possibly owing to the increasing gulf between borrowing and repayments recently expanding. Individual insolvencies in this quarter had risen 10.6% on the previous quarter, and were 7.7% higher than the previous year. The number of individual IVA cases in the UK in Q3 of 2017 had climbed 18.3% compared to the prior quarter – amounting to the largest number of IVAs recorded since they were introduced in 1987.

In spite of these figures, bankruptcies as a whole are on the decline. Q3 of 2017 saw bankruptcies fall 2.2% on the previous quarter, and 5.2% on the year previous. Bankruptcies on a creditors’ petition were lower than in Q2 2017 and Q3 2016 also.

Credit card write-offs rose gradually in December 2017 to their highest level since summer 2016 at £415 million. However, barring a seismic spike of £2.138 billion written off of UK credit cards in 2010, there has been little movement in this field since the nation began to recover from the uncertainty of the Great Recession in 2012.

4.4 million customer-to-bank contacts made using web chat occurred in 2016 – amounting to an average of 510 taking place every hour. Video chats are also gaining traction, with communicative form’s usage rising by 92% throughout 2016. Furthermore, 434 million text alerts helped keep customers on top of the processes, transactions and news regarding their accounts.

Throughout April 2016 to the end of March 2017, the Financial Ombudsman Service (FOS) handled 168,769 complaints regarding the sale of payment protection insurance (PPI). This figure represents 52.2% of the organisation’s cases.

During the year timeframe, there were 9,619 new complaints regarding credit cards – representing an increase of 17% over the prior year. However, complaints over bank and current accounts fell in this time by 35% to 38,299.The Financial Conduct Authority (FCA) estimated that 64 million PPI policies were sold in the UK between 1990 and 2010, while The Financial Ombudsman Service anticipated that in the year running to March 2018, it will receive 180,000 fresh complaints regarding PPI – making up over 55% of the organisation’s workload over the course of the financial year.